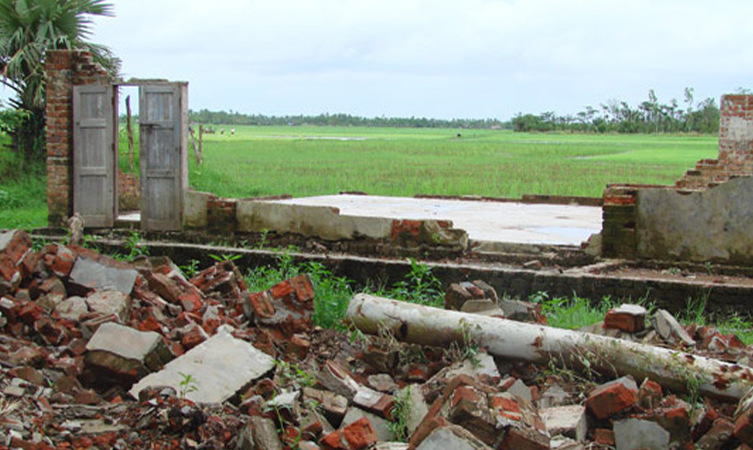 Negotiation is a process that involves parties meeting to identify and discuss the issues at hand so as to arrive at a mutually acceptable solution without the help of a third party. It is as a process involving two or more people of either equal or unequal power meeting to discuss shared and/or opposed interests in relation to a particular area of mutual concern.

The parties themselves attempt to settle their differences using a range of techniques from concession and compromise to coercion and confrontation. Negotiation thus allows party autonomy in the process and over the outcome. It is non-coercive thus allowing parties the room to come up with creative solutions.

Mediation is defined as the intervention in a standard negotiation or conflict of an acceptable third party who has limited or no authoritative decision-making power but who assists the involved parties in voluntarily reaching a mutually acceptable settlement of issues in dispute mediators may play a number of different roles, and may enter conflicts at different levels of development or intensity.

Globally, but Mediation in the political process is informed by resolution as against settlement.

It allows parties to have autonomy over the choice of the mediator, the process and the outcome.

The process is also associated with voluntariness, cost effectiveness, informality, focus on interests and not rights, creative solutions, personal empowerment, enhanced party control, addressing root causes of the conflict, non-coerciveness and enduring outcomes. With these perceived advantages, the process is more likely to meet each party’s expectations as to achievement of justice through a procedurally and substantively fair process of justice.

Mediation in the legal process is a process where the conflicting parties come into arrangements which they have been coerced to live or work with while exercising little or no autonomy over the choice of the mediator, the process and the outcome of the process. This makes it more of a settlement mechanism that is attached to the court as opposed to a resolution process and defeats the advantages that are associated with mediation in the political process.

The central quality of mediation is its capacity to reorient the parties towards each other, not by imposing rules on them, but by helping them to achieve a new and shared perception of their relationship.

In conflict resolution processes like mediation, the goal, then, is not to get parties to accept formal rules to govern their relationship, but to help them to free themselves from the encumbrance of rules and to accept a relationship of mutual respect, trust, and understanding that will enable them to meet shared contingencies without the aid of formal prescriptions laid down in advance.

The salient features of mediation (in the political process) are that it emphasizes on interests rather than (legal) rights and it can be cost – effective, informal, private, flexible and easily accessible to parties to conflicts. These features are useful in upholding the acceptable principles of justice: expedition; proportionality; equality of opportunity; fairness of process; party autonomy; cost-effectiveness; party satisfaction and effectiveness of remedies, thus making mediation a viable process for the actualization of the right of access to justice.

The Rio+20 Declaration on Justice, Governance and Law for Environmental Sustainability declares that environmental sustainability can only be achieved in the context of fair, effective and transparent national governance arrangements and the rule of law predicated on Fair, clear and implementable environmental laws; public participation in decision-making and access to justice and information in accordance with Natural Resource Conflicts in Kenya.

The criteria for determining procedural fairness has been identified as: First, people are more likely to judge a process as fair if they are given a meaningful opportunity to tell their story (i.e., an opportunity for voice); second, people care about the consideration that they receive from the decision maker, that is, they receive assurance that the decision maker has listened to them and understood and cared about what they had to say; Third, people watch for signs that the decision maker is trying to treat them in an even-handed and fair manner; and finally, people value a process that accords them dignity and respect.

Conflict management mechanisms such as mediation encourage “win-win” situations, parties find their own solutions, they pursue interests rather than strict legal rights, are informal, flexible and attempt to bring all parties on board  participation in decision making, especially in matters relating to natural resources management.

Public participation is a tenet of sound environmental governance and is envisaged in the Constitution.

Mediation in the informal context leads to a resolution (court-annexed mediation as envisaged under the Civil Procedure Act, Cap. 21 is a settlement process) and in environmental management it involves parties‟ participation in development planning, decision making and project implementation. The parties must be well informed so as to make sound judgements on environmental issues.

As such ADR mechanisms allow public participation in enhancing access to justice as they bring in an element of efficiency, effectiveness, flexibility, cost-effectiveness, autonomy, speed and voluntariness in conflict management. Some like mediation and negotiation are informal and not subject to procedural technicalities as does the court process. They are thus effective to the extent that they will be expeditious and cost-effective compared to litigation.

For the constitutional right of access to justice to be realized, there has to be a framework based on the principles of: expedition; proportionality; equality of opportunity; fairness of process; party autonomy; cost-effectiveness; party satisfaction and effectiveness of remedies.

Recognition of ADR and traditional dispute resolution mechanisms is thus predicated on these cardinal principles since they have advantages that would guarantee that everyone has access to justice (whether in courts or in other informal fora) and conflicts are to be resolved expeditiously and without undue regard to procedural hurdles that encumber the court system.

Conflict management through litigation can take years before the parties can get justice in their matters due to the formality and resource limitations placed on the legal system by competing fiscal constraints and public demands for justice. It is also borne out of the recognition of the diverse cultures of the various communities in Kenya as the foundation of the nation and cumulative civilization of the Kenyan people and nation. Most of these mechanisms are entwined within the cultures of most Kenyan communities which are also protected by the Constitution.

In Africa, there is the problem of the imposed Eurocentric law. The definition of the rule of law must be expanded to include those notions of justice that are held dear and respected by communities in Africa and Kenya. It must include the tenets of customary law and traditional justice systems.

To sum up, land dispute resolution through Mediation has proved to be more effective compared to court handled litigations.

Talk to us on info@suluhumediation.org

Founded in 2016, Suluhu Mediation Centre has provided negotiation and dispute resolution services and training to scores of clients including Body By Design, King Incubators, Individuals and Court Annexed Mediation under the Judiciary of Kenya.

SMS takes great pride in our focus on customer service. 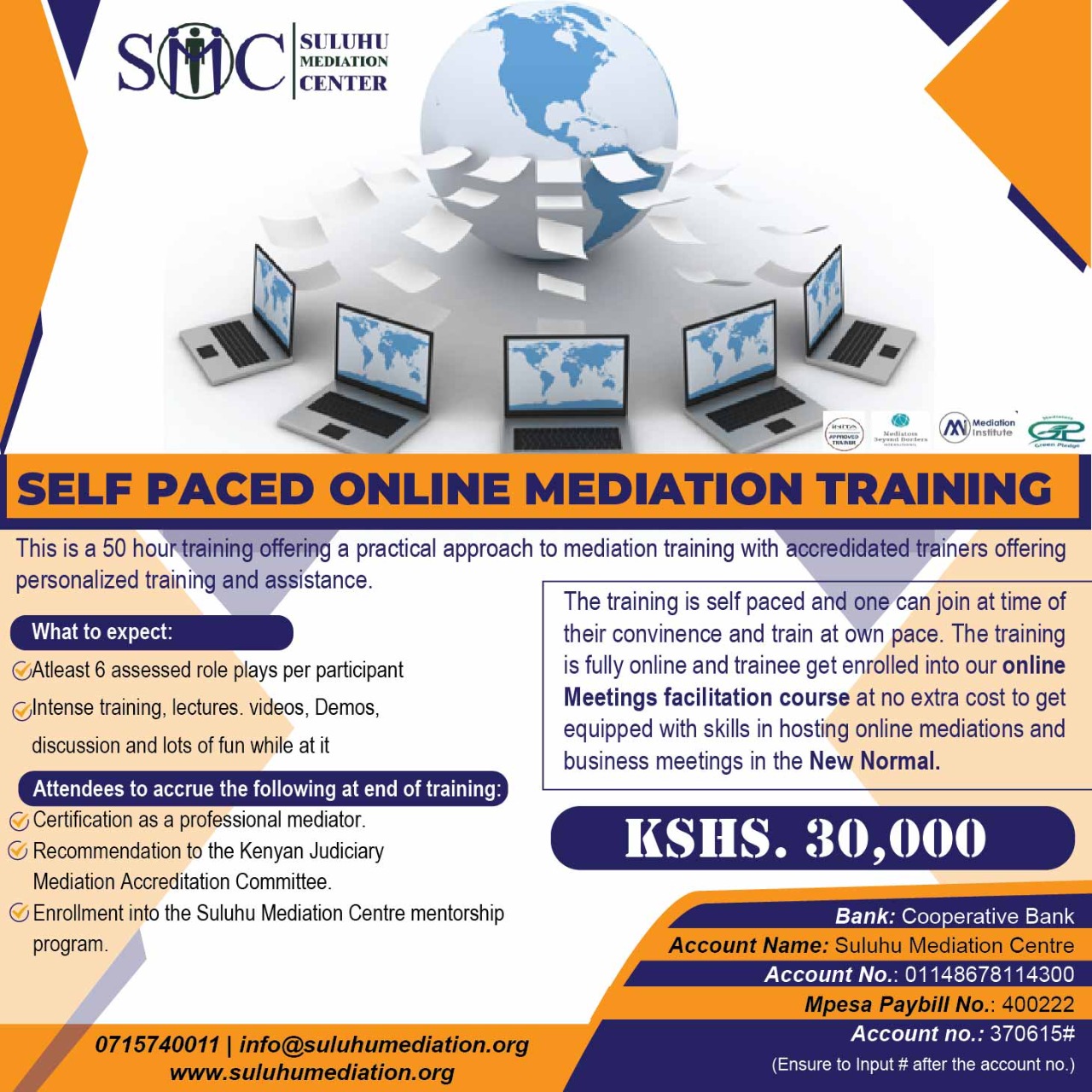